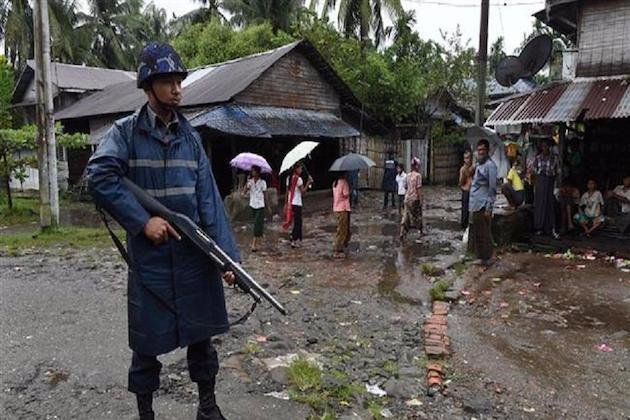 Myanmar security forces have shelled villages and blocked civilians from accessing food and humanitarian assistance in Rakhine State, Amnesty International said Monday, amid a crackdown since armed attacks by the Arakan Army in early January.

Security forces have also used vague and repressive laws to detain civilians in the area.

"These latest operations are yet another reminder that the Myanmar military operates without any regard for human rights. Shelling inhabited villages and withholding food supplies are unjustifiable under any circumstances,"  Tirana Hassan, Director of Crisis Response at Amnesty International said Monday.

Amnesty International says it has received reports that army divisions involved in atrocities against the Rohingya in August and September 2017 have been deployed to Rakhine State again in recent weeks.

"Despite international condemnation of the Myanmar military's atrocities, all evidence suggests that they are brazenly committing yet more serious abuses," Hassan said.

These violations come after a UN Fact-Finding Mission called for the criminal investigation and prosecution of senior Myanmar officials for crimes under international law against the Rohingya population in Rakhine State, and against ethnic minorities in Kachin and northern Shan States.

On 4 January 2019 – Myanmar's Independence Day – an ethnic Rakhine armed group known as the Arakan Army carried out coordinated attacks on four police posts in northern Rakhine State, reportedly killing 13 police officers. The Arakan Army has fought the military as part of an alliance of armed groups in northern Myanmar and, as it has moved its attention to Chin and Rakhine State in recent years, has clashed sporadically with security forces there.

Days after the 4 January attacks, Myanmar's civilian government instructed the military to launch an operation to "crush" the Arakan Army, which the government spokesperson referred to as a "terrorist organization." The military has since moved considerable assets and troops into the region, which local activists and media reports have said include soldiers from the 99th Light Infantry Division (LID). Amnesty International and others implicated that division in atrocities against the Rohingya in 2017 and against ethnic minorities in northern Shan State in 2016.

According to the UN, more than 5,200 men, women and children had been displaced by the ongoing fighting by 28 January. They are overwhelmingly from predominantly Buddhist ethnic minorities, including the Mro, Khami, Daingnet and Rakhine.

Amnesty International says it interviewed by telephone 11 people affected by the fighting, as well as humanitarian officials and local activists in Rakhine State. Most said they fled their villages after the security forces shelled nearby or placed restrictions on food.

"I heard the explosions of heavy artillery and people even got dizzy," a 64-year-old farmer recalled.

Another farmer from the same village, who returned days later to collect some belongings, said money was stolen from houses after people fled. He blamed Myanmar soldiers, who were seen in and around the village at the time.

A 24-year-old man from a predominantly ethnic Mro village in Tha Yet Pyin village tract, Buthidaung Township, similarly described hearing artillery or mortar shells exploding around his village on 13 January 2019. The villagers fled to the local monastery and then, later that day, to an informal displaced persons camp in Done Thein village, in neighbouring Kin Taung village tract. The man returned to his village four days later, to collect family registration documents, and saw damage to some houses in the village, as well as the local school. He said money had been taken from some houses, at a time when the Myanmar security forces controlled access to the village.

Media reports have detailed several other incidents. The Irrawaddy and Radio Free Asia reported that a seven-year-old boy named Naing Soe was critically injured when an artillery shell exploded near his home in Tha Mee Ha village tract, Rathedaung Township, around 26 January 2019. Radio Free Asia said that the Myanmar military fired into the village after soldiers triggered an improvised explosive device (IED) nearby. Both news outlets reported that the Myanmar military looted valuables from the village. The Irrawaddy also reported that on 16 January 2019, two brothers, aged 18 and 12, were seriously injured when an artillery shell exploded by their house in Maungdaw Township.

Although Amnesty International says it could not definitively determine the Myanmar military's responsibility for each individual attack that injured civilians or damaged or destroyed civilian property, such unlawful tactics have long been a hallmark of the military's operations against armed groups. In a June 2017 report, Amnesty International documented in detail indiscriminate shelling by the Myanmar military during its operations in Kachin and northern Shan States, which killed and injured civilians and displaced thousands.

"These unlawful attacks are sowing fear in many villages," said Tirana Hassan. "Hundreds, if not thousands, of civilians have been displaced from their homes as a direct result."

A 34-year-old woman from a remote ethnic Mro village in Kyauktaw Township told Amnesty International that Myanmar soldiers and police restricted the amount of rice that could be brought to her village. The villagers were already experiencing shortages of basic food supplies, as the fighting that erupted nearby in December 2018 prevented them from harvesting rice or bamboo, a key cash crop.

As the situation worsened, a group of people from the village, including the 34-year-old woman, went to a police station and military checkpoint near Taung Min Ku Lar village to request permission to carry rice back to their village. She said the security forces told them they could bring a maximum of six pyi (a Burmese unit equivalent to a 2.56-litre container) of rice and would need an authorization letter from the security forces.

"We talked among ourselves that it was impossible to live in our village anymore," she told Amnesty International. "We didn't want to move to a [displaced persons] camp, but we couldn't trade what we found in the forest, and we couldn't get through enough supplies."

A local activist told Amnesty International that he had helped obtain recommendation letters from the police to allow people to move around Kyauktaw Township, but the authorities are still stopping people from carrying food, claiming that it is to curtail supply lines to the Arakan Army.

The Myanmar authorities have also imposed further restrictions on humanitarian access in Rakhine State. On 10 January, the Rakhine State government barred all UN agencies and international humanitarian organizations, except the International Committee of the Red Cross (ICRC) and World Food Programme (WFP), from operating in five conflict-affected townships. Many organizations have had to stop their humanitarian assistance, undermining emergency response and relief efforts in one of Myanmar's poorest and most underdeveloped regions.

The Rakhine State authorities have, along with ICRC and WFP, provided some cash and in-kind assistance to people displaced by the fighting, but recipients described it as insufficient and inconsistent. Several humanitarian officials said the restrictions also seem to be a way to keep international eyes off the military's operations.

The Myanmar security forces also appear to be using abusive laws to detain and prosecute civilians for allegedly supporting the Arakan Army, raising concerns about arbitrary detention and potential ill-treatment.

In the days after the 13 January 2019 fighting in Tha Yet Pyin village tract, police took in an ethnic Mro village leader, Aung Tun Sein, and at least 10 other men for questioning. They were subsequently released, but, several days later, Aung Tun Sein was summoned to a Border Guard Police (BGP) post. He has been in detention since, currently in Buthidaung jail.

In a June 2018 report, Amnesty International says it documented torture and other inhuman treatment against Rohingya men and boys held in BGP posts in northern Rakhine State.

Family members and other village leaders were unable to determine Aung Tun Sein's whereabouts for more than a week after he was detained. The military has reportedly accused him of informing the Arakan Army about the military's movements. A person from the village said Aung Tun Sein was facing charges under the Unlawful Associations Act, a vague and repressive law that the Myanmar authorities often use to prosecute activists, journalists, and others in conflict areas.

Local activists and media reports suggest that arbitrary detentions and the use of vague and repressive laws have been commonplace during the latest military operation in Rakhine State. The Irrawaddy reported that 26 people were arrested on 4 February for alleged unlawful association with the Arakan Army. They also reported that around 30 village administrators submitted resignation letters in January, out of concern they might be wrongly prosecuted for unlawful association.