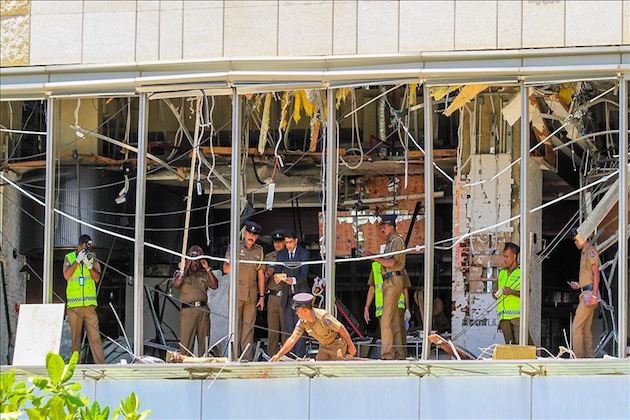 <p>COLOMBO, Sri Lanka - A wave of terrorist attacks have swept across Sri Lanka on Easter Sunday, killing hundreds of people, and injuring hundreds more.</p><p>As many as eight attacks have been carried out in various cities, principally the capital Colombo. Churches and hotels have been targeted. The death toll has been rising dramatically and at last count was 321, with at least five hundred on the injured list, according to Superintendent of Police Ruwan Gunasekara. About 500 more are injured. A large number of foreign nationals are believed to be among the dead.</p><p>The Sri Lankan government has imposed a 6pm to 6am curfew to get people off the streets, and have implemented a nationwide ban on social message and messaging apps to stop rumors and misinformation circulating which was adding to the duress people are enduring.</p><p>Three churches are believed to have been bombed, as well as at least 3 upscale international hotels.</p><p>Suicide bombers are believed to have been behind at least three of the blasts, including the 8th one which occurred at Orugodawatta, a northern suburb of Colombo.</p><p>Police later Sunday said they had identified the attackers. A subsequent raid of a house in Colombo late Sunday resulted in the arrest of 7 people however three police officers were killed in the operation. Since then Sri Lankan officials say another seventeen people have been arrested, taking the total to 24.</p><p>Australian Prime Minister Scott Morrison was heartfelt in sympathising with the Sri Lankan people when he spoke to media on Sunday night.</p><p>&quot;As Easter Sunday draws to a conclusion here in Australia, our heart goes out to those Christians and all of those other innocents who have been slaughtered today in this horrific terrorist attack,&quot; he said.&nbsp;</p><p>&quot;We still don&#39;t know who was responsible for this or what their motivation was, but we do know that innocent lives have been stolen once again, and our heartfelt sympathies go out to all of those who are bereaved tonight, us included, as we just share their sorrow.&quot;</p><p>&quot;And to the beautiful people of Sri Lanka, Australia sends its heartfelt sympathies and our prayers and our support and our offer to do whatever we can to support you in this terrible time of need,&quot; the Australian prime minister said.</p><p>Britain&#39;s prime minister Theresa May also sent a message of support. &quot;The acts of violence against churches and hotels in Sri Lanka are truly appalling, and my deepest sympathies go out to all of those affected at this tragic time,&quot; she said Sunday afternoon London time..</p><p>&quot;We must stand together to make sure that no one should ever have to practise their faith in fear.&quot;</p><p>The most profound message however was delivered by Pope Francis during his Easter Sunday Mass at the Vatican. &quot;I learned with great sadness the news of the serious attacks that, today, on Easter Sunday - they brought mourning and pain to some churches and other Sri Lankan hangouts,&quot; he said.</p><p>&quot;I wish to show my affectionate closeness to the Christian community, hit while gathered in prayer, and to all the victims of such cruel violence. I entrust to the Lord those who have tragically been lost and I pray for the wounded and all those who suffer because of this dramatic event.&quot;</p><p>The three churches attacked on Sunday were St. Anthony&#39;s Shrine in Kochchikade, St. Sebastian&#39;s Church in the nearby city of Negombo and Zion Church in the eastern city of Batticaloa.</p><p>St. Anthony&#39;s Shrine is a famous Roman Catholic church in the Archdiocese of Colombo and is dedicated to St. Anthony of Padua. The church is designated a national shrine.</p><p>St. Sebastian&#39;s Church in Negombo is patterned on the Reims Cathedral in France, and is built in Gothic style. Saint&nbsp;Sebastian&nbsp;is the patron saint of Negombo.</p><p>Zion Church in Batticaloa is a Christian church which has a pastor.</p><p>The 3 hotels targeted were the Shangri-La, Cinnamon Grand and Kingsbury hotels, all located in Colombo.&nbsp;</p><p>The UN Secretary-General said&nbsp;<a href="https://www.un.org/sg/en/content/sg/statement/2019-04-21/statement-attributable-the-spokesperson-for-the-secretary-general-terrorist-attacks-sri-lanka">in a statement</a>&nbsp;that&nbsp;on what was &quot;a sacred day for Christians around the world,&quot; he recalled &quot;the sanctity of all places of worship.&quot;</p><p>Turkish President Recep Tayyip Erdogan condemned the attacks. &quot;This is an assault on all of humanity. On behalf of the Turkish people, I offer my condolences to the families of the victims and the people of SriLanka, and wish a speedy recovery to the injured,&quot; he said.</p><p>Imran Khan, the prime minister of Pakistan, said in a tweet &quot;Strongly condemn the horrific terrorist attack in Sri Lanka on Easter Sunday resulting in precious lives lost &amp; hundreds injured. My profound condolences go to our Sri Lankan brethren. Pakistan stands in complete solidarity with Sri Lanka in their hour of grief.&quot;</p><p>Indian Prime Minister Narendra Modi said: &quot;There is no place for such barbarism in our region. India stands in solidarity with the people of Sri Lanka. My thoughts are with the bereaved families and prayers with the injured.&quot;</p><p>Afghan President Ashraf Ghani joined the chorus of condemnation: &quot;Attacking churches and hotels and targeting worshipers is appalling, and Afghanistan strongly condemns this heinous act of terror. Our thoughts and prayers go out to the victims and their families, and we stand in solidarity with Sri Lanka on this dark day.&quot;</p><p>In a Twitter statement, a spokesman for German Chancellor Angela Merkel, Steffen Seibert, said Germany was &quot;horrified by the news that Christians in Sri Lanka were attacked and killed during Easter services.&quot;</p><p>(Photo: Chamila Karunarathne - Anadolu Agency).</p><p>Story has been updated Wednesday 24&nbsp;April 2019, revising casualty figures.</p>