Fur farming in Ireland to be phased out 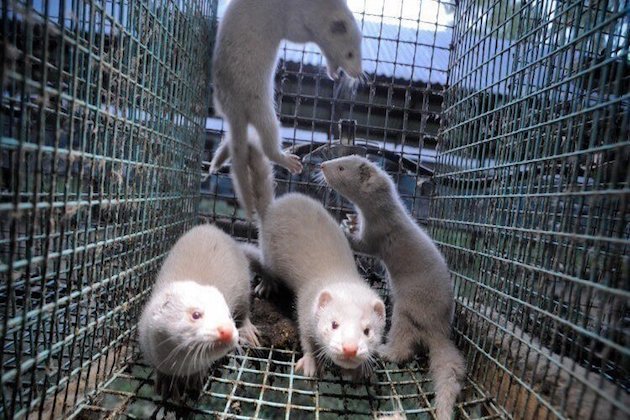 DUBLIN, Ireland - The Irish government on Tuesday made a decision to ban fur farming in the country.

Ireland will join a number of European countries to phase out mink farms, the latest being Norway.

"There has been considerable international and societal debate about fur farming. While the department has strengthened its controls over the sector in recent years, it is clear that there has been a shift in societal expectations in relation to the sector and recent veterinary evidence suggests that the farming of mink is counter to good animal welfare," the Minister for Agriculture, Food and the Marine, Michael Creed said Tuesday after the meeting of Cabinet which made the decision. "Taking these considerations into account, it is considered timely to commence the phasing out of the industry in Ireland."

The government says it will now proceed to bring forward a Bill which will be drafted in conjunction with the attorney general's office. The government bill will provide for a phased basis for the ban for existing operators."The government bill will make it illegal for any new fur farms to be established. Phase out arrangements will be put in place for the small number of current operators to allow for an orderly wind down of the sector and to allow time for employees to find alternative opportunities," the minister said.

The news will be welcomed by PETA which has campaigned for years for mink farming to be outlawed.

While many other European countries have banned fur farming, the approach has generally been to allow a phase out period over a number of years. There are currently three mink fur farms operating in Ireland, in counties Donegal, Laois and Kerry. These are seen as large farms producing approximately 110,000 pelts per annum.

There were four farms up until 2014, when the number was reduced to 3.

In 2011, a Review Group was established to examine all aspects of fur farming in Ireland. It examined the industry from all relevant aspects and did not recommend banning the industry. On foot of the Report, that was published in 2012, the Department of Agriculture, Food and the Marine introduced more rigorous controls on fur farms in the areas of animal welfare, accommodation, security and nutrient management. Fur farms became subject to regular inspections.

Norway's recent decision to ban fur farming, like Ireland, is on a phasing-out basis with the ban to take full effect by 2025. Norway is one of the world's top producers of fox felts, and is home to 300 fur farms.

Belgium last year decreed that its 17 mink farms must close by 2023.

Luxembourg's fur-farming ban came into effect in October 2018 after its animal-welfare law was passed in June. The country didn't have any fur farms, so the purpose of the ban was to prevent any new ones from opening, according to PETA.

In August 2017, the Czech parliament voted outlaw all fur farming from January this year. The bill received overwhelming support from politicians, and an opinion poll conducted the same year found 83% of Czech people were also in favour of the ban.

Following 20 years of campaigning by PETA Germany, including investigations, petitions, and protests, in 2017, German politicians voted to introduce fur-farming regulations so strict that raising minks for fur would no longer be commercially viable. The country's last fur farms will close down in 2022 after a five-year transition period.

In 2015, the Netherlands confirmed the introduction of a fur-farming ban, which will phase out the production of mink fur entirely by 2024. The decision came after thousands of PETA Netherlands supporters spoke out about the cruelty inherent in fur farming.

In 2014, the Republic of Macedonia introduced a fur-farming ban with a 3-year phase-out period, making the practice illegal as of 2017.

Slovenian MPs voted in favour of banning the hunting and farming of animals for their fur, skin, and closing down in 2013. Existing fur farms were forced to shut down within a three-year phase-out period.

A total ban on fur farming recently took effect in Serbia, bringing into force a provision of the 2009 Animal Welfare Act, which included a 10-year transitional period. In the face of heavy lobbying by the fur industry seeking to reverse the decision, PETA Germany joined more than 40 other animal-protection groups worldwide in years of determined campaigning to make sure that the Serbian government followed through on its promise.

A fur-farming ban took effect in Croatia in 2017 following a 10-year phase-out period. When the ban, which was passed in 2006, was challenged by chinchilla breeders, animal rights groups and concerned members of the public urged the country's Minister of Agriculture to uphold a complete ban. Sharon Osbourne was among them, and in a PETA video, she explained how chinchillas suffer and are killed on fur farms. The government listened and followed through on its promise – sparing countless chinchillas a lifetime of misery and a painful death.

Back in 2004, six out of Austria's nine federal states completely outlawed fur farming, and the other three implemented strict animal-welfare regulations that made the practice unviable.

Fur farming has been illegal in Britain for nearly two decades – a ban came into force in England and Wales in 2000 and was extended to Northern Ireland and Scotland in 2002.Under EU regulations, it's illegal to trade in cat, dog, or seal fur, but the fur of other animals, such as coyotes, foxes, raccoon dogs, and minks, can still be sold.

In Ireland at present, according to PETA, up to 200,000 minks are gassed and skinned every year.