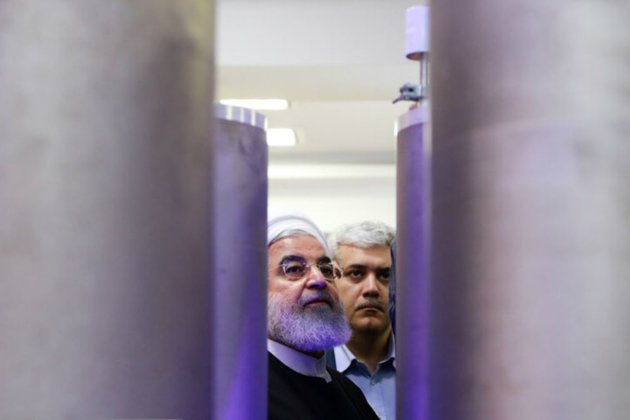 European parties to the 2015 Iranian nuclear deal have called on Tehran to reverse recent steps to enrich uranium at a higher purity than allowed under the agreement while also calling for an urgent meeting of all involved in the accord.

In a joint statement issued on July 9, Germany, Britain, France, and the European Union expressed 'deep concern that Iran is not meeting several of its commitments under the Joint Comprehensive Plan of Action,' or JCPOA, as the 2015 nuclear deal is known.

Iran announced on July 8 that it had enriched uranium beyond the 3.67 percent purity level allowed under the nuclear deal with world powers -- passing the 4.5 percent level.

Tehran says it has lost patience with a perceived lack of action by the European side to help Tehran economically in the face of crippling U.S. sanctions reimposed following the withdrawal of the United States from the deal in 2018.

Germany, Britain, France, and the European Union noted that Iran has said it wants to remain in the deal.

"It must act accordingly by reversing these activities and returning to full JCPOA compliance without delay," the statement said.

The European signatories to the deal also called on all parties "to act responsibly toward deescalating ongoing tensions.'

Amid the tensions, U.S. President Donald Trump issued a new warning to Iran on July 9.

'Iran is doing a lot of bad things...and they'd better be very careful,' Trump told reporters at the White House.

French Foreign Minister Jean-Yves Le Drian said that the U.S. can help encourage dialogue with Iran to ease growing tensions even though it exited the nuclear accord with Iran.

Speaking to the French Senate on July 9, Le Drian said that Iran's decision to surpass two accord thresholds -- stockpiling weakly enriched uranium and enriching uranium beyond the 3.67 percent limit -- amounts to 'a bad reaction to a bad decision,' a reference to the U.S. withdrawal.

'The Americans, even if they're no longer signatories...can make needed gestures of appeasement to open a space of discussion to avoid an uncontrolled escalation, or even an accident,' he said.

Meanwhile, Israeli Prime Minister Benjamin Netanyahu, a staunch critic of the nuclear deal, issued a warning to Iran on July 9 -- a day after Iran announced it has begun enriching uranium beyond the limit set by the 2015 nuclear agreement.

Standing in front of an F-35 stealth fighter during a tour of an Israeli air base on July 9, Netanyahu said Iran 'ought to remember that these planes can reach every place in the Middle East, including Iran and certainly Syria.'

Israel has long said that every option is on the table to ensure that Iran does not develop a nuclear weapon.

Tehran has repeatedly said that it is not seeking nuclear weapons and that all of its nuclear activities are for peaceful purposes.

With reporting by AP and Reuters