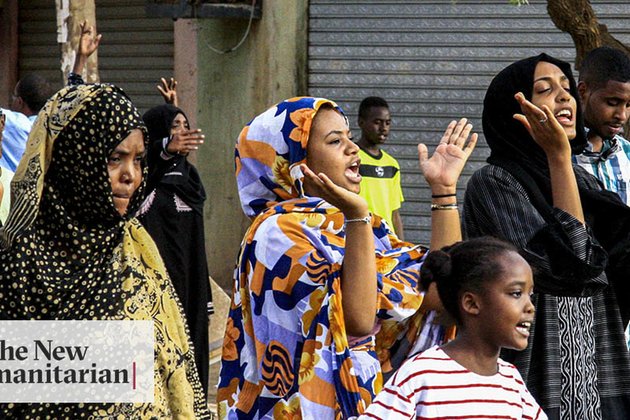 A photo of Ala'a Salah standing on the roof of a car, leading Sudanese pro-democracy protesters, captured the raw street power of a people's movement determined to end the 30-year-old regime of President Omar al-Bashir - and it went viral.

Ala'a, like many women before and alongside her, was front and centre of the country's revolution.

As a Syrian activist, seeing that photo of Ala'a reminded me of the brave girls and women who also called for change - in streets, in parks, and on top of cars, too - at the beginning of the Syrian revolution (and war) in 2011. Despite the miles and years that separate our movements, I felt more connected than ever to my sisters in Sudan.

Then in the weeks after the photo went viral, protests in Sudan continued but were largely out of the news. I was disappointed but unsurprised: after all, it wasn't long ago that the world was reading about Syrian women advocates before we too disappeared from international headlines.

Today, Sudan's powerful women revolutionaries are back in the news. The country's Transitional Military Council has buckled to the pressure of a mass movement and agreed to a power-sharing government.

But we can't forget that girls and women were also systematically attacked, raped, and tortured in the military's crackdown on protesters on 3 June before the TMC finally agreed to a political deal. These horrific atrocities are unacceptable realities for women human rights defenders around the world and must urgently be addressed.

As a women's rights activist and native of Syria's Eastern Ghouta, I have an especially deep insight into its five-year siege by government forces, and how the peaceful protests were met with awful violence. Civilian activists, many of us women, were trying to push for a positive change in our community and our country.

To truly stand in solidarity with our sisters in Sudan, Syria, and beyond, we need the international community to do much more than share a photo or join a trending social media campaign. We need global leaders to really walk the talk when it comes to supporting girls and women in humanitarian settings.

And that includes those structural inequalities that force women in Sudan to be on the front line of the country's expanding food crisis, or in Syria condemns women-headed households to vulnerability and the threat of exploitation.

We are more than photographs

Real change begins by hearing the voices of women human rights defenders in the ever-changing news cycles. We are more than photographs frozen in time - we fight every day for the space to raise our voices.

In the besieged areas of Eastern Ghouta, before they were re-captured by the Syrian government last year, women lived underground enduring huge personal risk to share information about their safety and health needs to trusted organisations. And on the streets of Khartoum, Sudan, women yell it out loud in microphones that can be snatched away by intimidating soldiers.

It shouldn't be the case that we also face roadblocks to advocating at global meetings held in places like New York and Geneva - but it is. Between 1990 and 2017, women made up only 2 percent of mediators, 8 percent of negotiators and 5 percent of witnesses and signatories to global peace processes, according to UN Women. Meanwhile, in Syria, women still aren't sufficiently included in post-conflict constitutional deliberations.

This needs to change - after all, when women are included, peace negotiations are 35 percent more likely to succeed.

There must be a more intentional effort to ensure women have seats at these important decision-making tables, especially considering the instrumental roles we play in revolutionary movements. When nationality and refugee status impedes our participation, international organisations can use their power and leverage to get us there.

All of this requires a longer-term support for local women-focused civil society organisations (CSOs) in humanitarian settings, which help keep advocates safe and gives them a platform to be heard, even when our work fades from international view.

As the country director for Women Now for Development - a women-led CSO that works to empower girls and women in Syria and Lebanon - I've seen how grassroots organisations can provide safe spaces, build advocacy skills, and deliver humanitarian assistance where it's most needed. I know this is also the case in Sudan, because our team stays in touch with Sudanese women activists to share experiences and encourage each other to continue.

Yet continuing with our work is difficult in a situation where our organisations rely on scarce resources to meet the tremendous needs of the communities we serve. For example, while Syrian-led CSOs deliver an estimated 75 percent of humanitarian aid in my country, they receive less than 1 percent of direct funding - with even less to those focused on women.

And globally, less than 3 percent of international humanitarian aid goes to local and national first responders. To power progress, we need the international community to use their pocketbooks more than their Facebooks to support women change-makers in these contexts.

That the work of women human rights defenders persists despite the great challenges we face every day is revolutionary in itself. What it will take to help advocates continue this vital work, however, is not revolutionary at all: more money, influence, and decision-making power. We've said it all before - on top of cars, in streets, and on global stages. Now it's time to be heard.