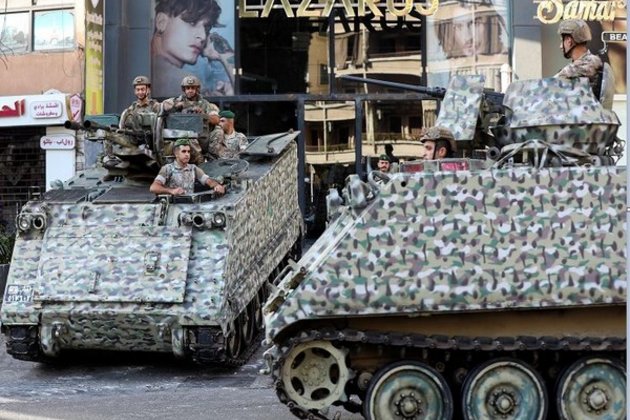 By John SolomouNicosia [Cyprus], October 18 (ANI): While Lebanon is facing unprecedented economic meltdown, the consequences of the huge explosion in Beirut port and the spread of Covid -19 pandemic, last Thursday unidentified snipers started firing at protesters in the Tayouneh area of capital Beirut, killing seven civilians and combatants and wounding more than 30 people. Many of the protesters were armed.

A few minutes later scores of armed gunmen exchanged fire with assault rifles and rocket-propelled grenades, bringing to memory the ghastly civil war that ravaged Lebanon from 1975 to 1990, which never really ended.

Beirut residents crouched in fear in their homes while teachers herded children in basements to protect them from the fierce shooting.

Hezbollah officials accused the Lebanese Forces (LF)- a Christian militia led by Samir Geagea - of starting the shooting, but said that Hezbollah would not be pushed into more violence.

The protesters claim that authorities were singling out Shiite politicians for questioning and blame. They demanded the removal of Judge Tarek Bitar from the investigation of the port explosion after the Court of Cassation dismissed a complaint and allowed him to continue his probe. The deadly blast at Beirut port on 4 August 2020 killed more than 215 people, wounded about 6500 and destroyed several neighbourhoods in the capital.

The Lebanese Forces deny that they started Thursday's clash and claimed that Hezbollah had "invaded" areas of the city it should not have entered. The LF blamed the clashes on the "uncontrolled and widespread weapons" in the hands of Hezbollah, which is exploiting sectarian tensions to derail the port investigations over fears it could be blamed for the blast.

An uneasy peace was restored four hours later by the Lebanese Army which cordoned off the area, where there are scores of damaged cars and pockmarked buildings. The Army has arrested eight Lebanese and one Syrian in connection with the deadly violence.

Many Beirut residents told the mass media that the heavy gunfire made them recall the worst days of the long civil war, which devastated large parts of Beirut, a city that in the past was called "Paris of the East".

The two Shiite movements accused Bitar of targeting in his probe former Ministers of Finance and Public Works - both close allies of Amal and Hezbollah-while ignoring the responsibilities of officials of other political factions.

Judge Bitar was assigned the task of finding those responsible for the detonation of hundreds of tons of ammonium nitrate that were improperly stored at a Beirut port warehouse. It was one of the largest non-nuclear explosions in history and further devastated the country already beset with political divisions and financial trouble.

Friday was declared by the government as a day of mourning, while funerals were held in various places. There were no serious incidents at the funerals.

In a televised address Lebanese President Michel Aoun declared that those responsible for the violence would be held accountable. Aoun compared the clashes to the Lebanese civil war, stating "It took us back to the days that we said we would never forget and never repeat".

Although Aoun is a political ally of Hezbollah and Amal, he said the investigation into the blast at the port would continue, putting him at odds with protest leaders.

The turbulent history of Lebanon, which has 18 recognized sects, such as Sunni and Shiite Muslims, various denominations of Christians and others, is full of periods of conflict and acrimony. This situation recently led to the economic collapse of the country, which the World Bank ranked among the three worst in the world since the mid-1800's.

The Lebanese state is very close to total collapse, as the country's factions and politicians serve exclusively their own interests, ignoring the general interest of the state. During the past few decades, the Iranian-backed Hezbollah organization has emerged as the most powerful political and military grouping. The Shiite militia, designated by the US and Israel as a terrorist organization, has an arsenal of more than 100,000 rockets and thousands of trained combatants who fight in proxy wars in Yemen, Syria and Iraq.

Until recently, Hezbollah enjoyed popular support in Lebanon as the only force in the country which actively fights Israel, but now this support is waning, due to the fact the militant organization has become stronger than the state. It has its own phone network, its own financial system, imports fuel, and has its own paramilitary forces. Furthermore, it rejects the technocratic government which will try to reform the ossified sectarian political system in Lebanon and carry out reforms, as the international donors who want to help Lebanon demand.

Lebanese journalist and author Kim Ghattas says that the Lebanese are "fed up" with the militant group Hezbollah and want to strive for a government that better resembles the diversity and cosmopolitan nature of its citizens.

The fact that there is popular anger against Hezbollah is shown by an incident which occurred last August when villagers of the Druze community in Southern Lebanon seized four Hezbollah operatives who had just launched a rocket attack on the Israeli Golan Heights. The villagers feared that Israel might retaliate against their settlement and so took an action that would have been unthinkable in the past: They arrested members of the Hezbollah.

Tom Rogan, the national security writer at the Washington Examiner, points out: "Taken separately, the port explosion, operatives' seizure, and Thursday's gun battle might seem to be isolated incidents. But taken together, they show how the once-vaunted resistance is facing very serious resistance of its own from the Lebanese people."However, nobody knows if Hezbollah will grudgingly ease its stranglehold over the Lebanese state or will start a new civil war against its adversaries to protect its prominent place if it feels cornered. (ANI)