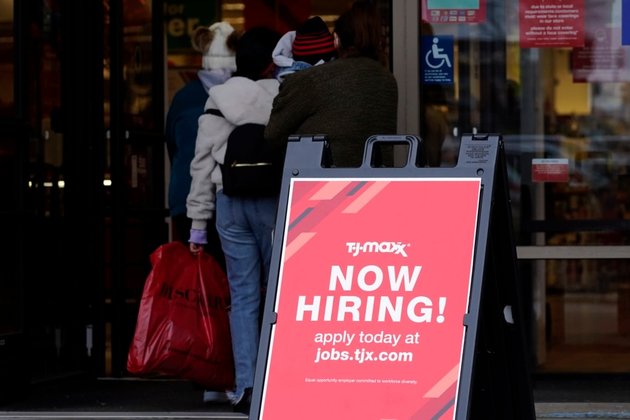 WASHINGTON - First-time claims for U.S. unemployment compensation dropped sharply last week to a 52-year low, easily falling below the figure recorded at the start of the coronavirus pandemic that has played havoc with the U.S. economy over the last 20 months, the Labor Department reported Wednesday

A total of 199,000 jobless workers filed for assistance last week, down 71,000 from the revised figure of the week before and the lowest recorded figure since November 1969, the government said. The new weekly figure was also well below the 256,000 total in mid-March of last year when the pandemic first swept into the country and employers started laying off workers by the hundreds of thousands.

The new figure was an indication the U.S. economy, the world's largest, remains on a recovery path from the worst economic effects of the coronavirus pandemic.

The advance is occurring even as President Joe Biden and Washington policy makers, along with consumers, voice concerns about the biggest increase in consumer prices in three decades and supply chain issues that have curtailed delivery of some products to retail store shelves.

A man browses largely empty shelves for cat food at Pet Club on Nov. 18, 2021, in Emeryville, California. According to store employees, supply chain issues are preventing the store from keeping products stocked.

The declining number of claims for unemployment benefits shows that many employers are hanging on to their workers even as millions have quit jobs to move to other companies offering higher pay and more benefits.

U.S. employers added 531,000 jobs in October, the biggest monthly gain in three months and the unemployment rate dropped to 4.6%. But the U.S. economy is still short more than four million jobs since February 2020.

Even as consumers worry about higher food and fuel prices, President Biden said Tuesday, "We're experiencing the strongest economic recovery in the world."

"Even after accounting for inflation, our economy is bigger and our families have more money in their pockets than they did before the pandemic," Biden said. "And America is the only major economy in the world that can say that."

About 7.4 million workers remain unemployed in the United States. There are 10.4 million available jobs in the country, but the skills of available workers often do not match what employers want, or the job openings are not where the unemployed live. In addition, many of the available jobs are low-wage service positions that the jobless are shunning.

The annual size of the U.S. economy - nearly $23 trillion - exceeds its pre-pandemic level as it recovers faster than many economists had predicted during the worst of the business closings more than a year ago.

The Federal Reserve, the country's central bank, is curtailing its year-plus support for the U.S. economy during the worst of the pandemic. It announced earlier this month it would cut its $120-billion-per-month purchase of Treasury investments and mortgage-backed securities by $15 billion by the end of November. In addition, the Fed is reducing purchases to $90 billion per month in December but left its benchmark interest rate unchanged.

How fast U.S. economic growth continues is unclear. The delta variant of the coronavirus continues to pose a threat to the recovery, with more new cases being recorded again after the number had declined in recent weeks.

Thanksgiving holiday travelers wait in line for screening near a sign for a COVID-19 testing site at the Los Angeles International Airport in Los Angeles, Nov. 24, 2021.

About 60 million eligible Americans remain unvaccinated against the coronavirus, a figure Biden says is "unacceptably high." The president has mandated that 84 million workers at companies with 100 or more employees get vaccinated by January 4 or be tested frequently, but the order is being contested in a raft of lawsuits that have yet to be decided.