The unanswered questions one year after Maradona's death 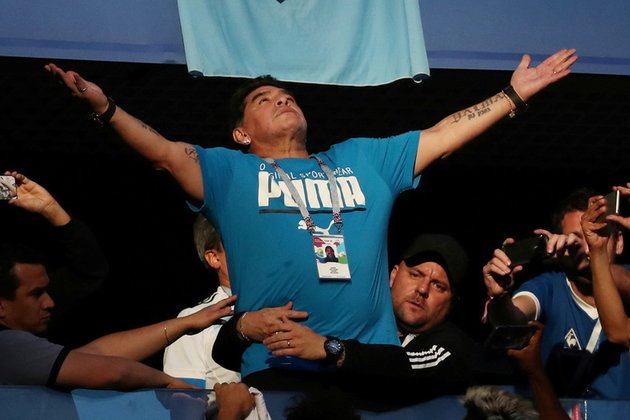 A year ago today, the football world lost one of its biggest icons when Diego Maradona passed away at the age of 60. With many issues left unresolved, the Argentine legend can't yet rest in peace.

The year 2020 was rough for many. But especially those in Argentina. Ravaged by Covid and with its peso currency worth peanuts amid rampant inflation, the South American country also lost its idol in Diego Maradona.

Placed on a pedestal even higher than Lionel Messi in mainstream society, the number 10 was one of them. A slum boy who rose out of Villa Fiorito to become the planet's best player, and perhaps the greatest the sport has ever seen alongside Pele, Maradona landed La Albiceleste their second World Cup title in 1986 and got them to the final of Italia '90.

A flawed genius with notable drug and alcohol addiction issues, his death caused a national outpouring of grief and was reported on around the clock by local TV as rival fans of clubs such as Boca Juniors and River Plate were briefly united to show their respects.

A year on, however, as tributes across the map roll in on the anniversary of his passing, there is still much that remains unresolved or doesn't sit well, and therefore prohibits D10S (i.e. 'Dios' or god in Spanish) from resting in peace.

An autopsy revealed that Maradona died of an "acute edema of the lung, associated with a flare-up of chronic cardiac insufficiency" while suffering from "long-term cardiomyopathy" at a rented home in Tigre.

Suspected of possible negligence and failing to properly carry out their medical duties, the group was charged with homicide in May as part of criminal proceedings looking into his death.

This came after a panel of 20 medical experts found that Maradona's care was "plagued by deficiencies and irregularities".

"I'm proud of what I did," said Luque, who performed brain surgery on his patient two weeks before he passed.

"I did my best. I offered Diego everything I could: some things he accepted, others not.

"I am not afraid of going to prison," Luque added, denying that he had abandoned Maradona.

However, whether he and his colleagues will end up behind bars for any alleged wrongdoing could take years to resolve.

'Buried without a heart'

In a sad twist to the tale, Maradona was reportedly buried without a heart.

Already penning a book named 'The Health of Diego', neurologist and TV anchorman Nelson Castro claimed this week that the organ was removed from the player's corpse to study as it was "very important in determining the cause of Maradona's death."

"He had a privileged body in terms of resistance, as the doctor of his dilated heart disease said [that] other people would have died [from it]. The problem is that he never wanted to make a sustained recovery," Castro added.

Also claiming that the heart "weighed half a kilo, when a normal heart weighs 300 grams" and was oversized "due to other things such as his heart failure and the heart disease he had," Castro further explained that a plan had been hatched to rob the body part by hooligans of the last club he managed, Gimnasia y Esgrima La Plata.

Daughters and lawyer at loggerheads

The investigation into Maradona's death was only opened after complaints from his daughters.

Elsewhere, though, Giannina - the former partner of Manchester City legend Sergio Aguero - and Dalma have disputes with their father's legal representative.

Last month Dalma was quoted as having blasted Matias Morla's acting as an intermediary to broker a memorial friendly between Barcelona and Boca Juniors.

"This is the guy who approached my father as a fan and now claims to be the owner of my father's image, voice and name, stating that this is not his children [who are the owners]," she fumed.

As implied, the sisters are in a dispute with Morla over Maradona's brand and image rights, which has reportedly led to his offices being raided by anti-fraud police in March as they accused him of "betrayal, dishonesty and abuse" when managing Maradona's affairs.

Defending his corner, Morla has insisted that "Diego said: 'The Maradona brand will look after my sisters, the image will look after my heirs'" with the ex-player allegedly signing documents to that end in Dubai in either 2015 or 2016.

Additionally, he has also claimed that his client's daughters "don't like me because in 2014 we took away their credit cards."

"He died alone, apart from the sisters with whom he spoke every day and [his ex-girlfriend] Veronica Ojeda, who went to see him with Dieguito Fernando, his son," Morla has also been quoted as saying in a previous reply to the siblings.

Separately, though, he has agreed that Maradona's care before his death was "very bad".

"There were many mistakes made... they inflated and inflated the poor guy until his heart exploded," Morla said during a three-hour testimony.

Cashing in on Maradona in poor taste

On the anniversary of Maradona's death, Dalma Maradona has confirmed she will not participate in any commemoration events to mark "the worst day of my life".

"Justice is the only thing I ask," she added.

But the sisters have also reportedly been against the money-spinning friendly between debt-ridden FC Barcelona and Boca Juniors too, and with good reason.

Taking place in Saudi Arabia in December, it is a poor tribute to one of football's most-loved figures. If anything, the 'Maradona Cup', as it has been dubbed, should be played between Boca and Napoli - where he left his greatest legacy in club football - or his boyhood outfit Argentinos Juniors and one of these foes.

And even if it were to be contested between Boca and Barca - the latter of which he failed to make an impact at before being sold to Napoli - surely Camp Nou or La Bombonera would make a better choice of venue and provide supporters with a proper chance to pay their homages.

At least Euro and Copa America winners Italy and Argentina have the right idea by competing in a planned 'Maradona Super Cup' in Naples, or, if not, Wembley next June.

Legal woes beyond the grave

Following video footage of her in a hotel room together with Maradona, a Cuban woman named Mavys Alvarez has been in Buenos Aires this week to testify.

She claims that in 2001, while she was just 16, 40-year-old Maradona raped her when in Havana for drug treatment while her mother was in the next room.

"He covers my mouth, he rapes me, I don't want to think about it too much," Alvarez said.

"I stopped being a girl, all my innocence was stolen from me. It's hard. You stop living the innocent things that a girl of that age has to experience."

Maradona's entourage is being investigated for allegedly trafficking Alvarez to the Argentine capital where she was kept in a hotel room for three months, pressured into having breast implants and only allowed out for accompanied shopping trips or visits to the zoo.

This week she said she was also forced to take cocaine by Maradona, who was "super aggressive" when she refused, and there were also external pressures on her family due to his relationship with former Cuban leader Fidel Castro.

"My family would never have accepted it if the Cuban government had not been involved," she claimed.

"They were forced in another way to accept a relationship that was not good for them, or for anyone."

Filing her complaint "in order to help all women" and "all victims of trafficking [and] of crime", Alvarez admitted how hard it was to step foot on Argentine soil again with Maradona so revered his homeland.

"It's hard to be in his country, to see that he is everywhere, he is an idol and at the same time everything I remember about him as a person feels ugly," she concluded.

Representing Carlos Ferro Viera, though, a businessman who formed part of said entourage, attorney Fernando Burlando remarked to Sky Sports that the testimony was a "compendium of accusations more than anything to Diego Maradona".

Just like the other legal woes tied to his name, it is one more wrangle that looks set to take time to resolve and will add to Maradona's mixed legacy.

The statements, views and opinions expressed in this column are solely those of the author and do not necessarily represent those of RT.