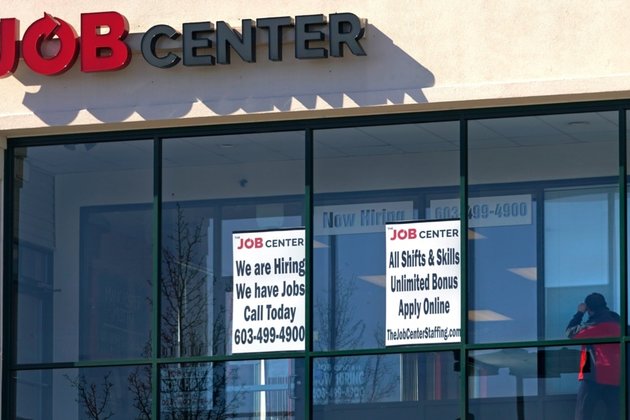 WASHINGTON - First-time claims for U.S. unemployment compensation increased unexpectedly last week to their highest level since mid-November, suggesting some employers may be laying off workers as the omicron variant of the coronavirus surges throughout the country and curtails some business operations.

The Labor Department said Thursday 230,000 filed for jobless benefits, up 23,000 from the week before, but the figure was still below the 256,000 figure recorded in mid-March, 2020, when the coronavirus first swept into the United States and businesses started laying off workers by the hundreds of thousands.

For the most part, employers have been retaining their workers and searching for more as the United States continues its rapid economic recovery from the coronavirus pandemic. The country's unemployment rate dropped in December to 3.9%, not far above the five-decade low of 3.5% recorded before the pandemic disrupted the world's biggest economy.

Many employers are looking for more workers, despite about 6.9 million workers remaining unemployed in the United States.

At the end of November, there were 10.4 million job openings in the U.S., but the skills of available workers often do not match what employers want, or the job openings are not where the unemployed live. In addition, many of the available jobs are low-wage service positions that the jobless are shunning.

U.S. employers added only 199,000 new jobs in December, a lower-than-expected figure. But overall, 6.3 million jobs were created through 2021 in a much quicker recovery than many economists had originally forecast a year ago.

The U.S. economic advance is occurring even as President Joe Biden and Washington policy makers, along with consumers, are expressing concerns about the biggest increase in consumer prices in four decades - 7% at an annualized rate in December.

The surging inflation rate has pushed policy makers at the country's central bank, the Federal Reserve, to move more quickly to end their asset purchases they had used to boost the country's economic recovery, by March rather than in mid-2022 as originally planned.

Minutes of the Fed board's most recent meeting showed that policy makers are eyeing a faster pace for raising the benchmark interest rate that they have kept at near zero percent since the pandemic started.

The Federal Reserve has said it could raise the rate, which influences the borrowing costs for loans made to businesses and consumers, by a quarter-percentage-point three times this year to tamp down inflationary pressures.