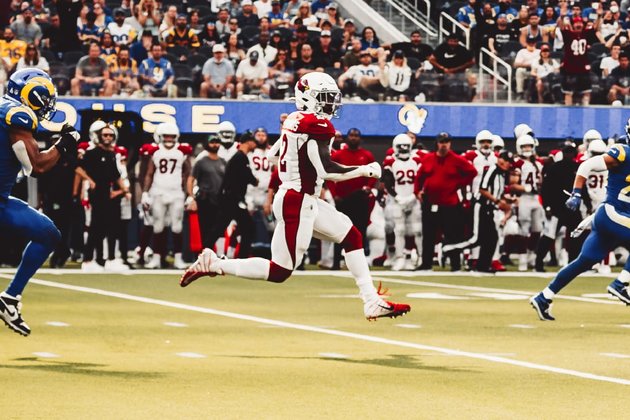 Chase Edmonds' injuries robbed him the chance to help the Cardinals clinch the NFC West title Sunday in the regular-season finale.

It was frustrating and disappointing for the running back, dealing with ribs and toe issues, to watch from the sidelines. But Edmonds expects to rejoin his teammates for the Cardinals' most important game this season: The NFC Wild Card matchup against the Rams on 'Monday Night Football.'

"I'm feeling good to go," Edmonds said Thursday. "I'll be out there Monday night. 'No. 2' will be suited up. I practiced (Thursday), and everything felt pretty good. We still have a couple of days until Monday, so I'll be able to keep healing my body."

Edmonds is not the Cardinals' only back dealing with an injury. James Conner suffered a ribs injury during the Week 18 loss to the Seahawks. Coach Kliff Kingsbury said his status will likely be a game-day decision.

Edmonds acknowledged he's not a doctor and does not want to speak for his teammate but said he believes Conner will play.

"To me, with this playoff game, I find it very hard to believe that J.C. is going to miss this game," Edmonds said. "Just knowing the competitor that he is, it's going to be hard not to see No. 6 out there. Hopefully, he will play.

"It's been a while since me and J.C. have been able to share the field both healthy. I feel like we feed off each other's success. And I think that's such a crucial part of the flow of our offense. Hopefully, we're able to stay healthy, feed off each other and get some good momentum for the offense."

Edmonds and Conner have played only one game together -- Dec. 19 in Detroit -- since Week 9.

Monday will be the Cardinals' first playoff appearance in six seasons. Like many of his teammates, Edmonds will be playing in the postseason for the first time since entering the league in 2018, and he has taken steps to prepare mentally.

"I like to disconnect," Edmond said. That's what I've been doing for the most part. Just disconnect from the social media world. Disconnect from the outside world. Just focusing on our game plan to help our team do everything we can to give ourselves the best chance to win this game on Monday."

Quarterback Kyler Murray said getting both Edmonds and Conner back for the playoffs would only benefit the offense.

"Now we're in the playoffs, to have both of them back would be crucial for us," Murray said. "They're two guys everyone knows they can count on and have 100 percent trust in to get the job done. I'm positive if they're out there, they'll be ready to go."

WATT, PHILLIPS, WILSON BACK TO WORK

Defensive end J.J. Watt returned to practice Thursday for the first since Oct. 22. Kingsbury said Watt returning to the field is a step in the right direction but would not say whether he will play Monday against the Rams.

"We're not going to get ahead of ourselves on whether he will play or not for a while," Kingsbury said. "It's great to have him back out there and get him involved with some of the drill work. He was very limited, but we wanted to get him back out there to do some functional exercises and that was the step today."

"He's on the right track to where we hope we can get something out of him by Monday," Kingsbury said.

Kingsbury added that cornerback Kevin Peterson cleared concussion protocols on Wednesday, which is more positive news for a Cardinals' secondary dealing with injuries.

For the Rams, defensive lineman Aaron Donald (rest), linebacker Leonard Floyd (back), running back Buddy Howell (hamstring) and safety Taylor Rapp (concussion) were DNP, although it was estimated because the Rams did not practice.

WALKER BACK TO PRACTICE SQUAD

Beasts of No Nation