What They're Saying: Buffalo Bills 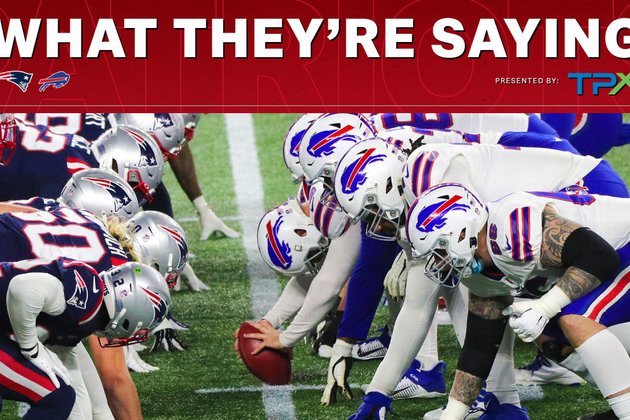 A look at what Buffalo Bills coaches and players are saying ahead of their Wild Card Playoff game against the New England Patriots.

On facing the Patriots...

"Playing at home in the Wild Card round against our division rival, a team that has been the standard for long term success in the NFL for the last 25 years. It's going to be a great challenge. We're super excited for the opportunity. Obviously, they beat us at home last time and it's going to be another dog fight."

"It's hard to beat a team twice in a season. That speaks for both sides because we are 1-1 on the season. They beat us at home and that's where we are playing this game. So, we have to be ready for whatever they can throw at us. It's going to be a 12-round slugfest, in my opinion, and it is going to take all four quarters to win the game."

"It's just going to be an old school slobber knocker. We're going to do what we always do. We're going to go out there and play fast and physical especially up front. We hear all the chirping. We hear guys talking about this and that. That doesn't mean anything because we're going to chop it up and we're going to let the pads do the talking come Saturday."

"They're incredible that way in how they can change things up and what Coach Belichick does to stay a step ahead. So we obviously have our work cut out for us. It's a short week in some regards here so we've got to get ourselves ready to go."

On the Patriots run game...

"They're very, very diverse and they've got some good running backs. They've got good contact balance, run the ball extremely hard. They've got a very solid offensive line that blocks well for them. They're able to turn the dial. When one run is not working, they mix it up and go to the next one. So, we're going to have to play well and execute to win."

On the atmosphere at Highmark Stadium...

On facing the Patriots for a third time...

"Ball security is the number one priority going into this game. Trying to end every drive with a kick. Playing a team three times in the season, we know each other extremely well. They know us, we know them, so it's whoever can adjust quicker. Whoever can show a different look than we saw maybe the first go-around or the second go-around and throw a different wrinkle in again. That's why coach Belichick is one of the, if not the, greatest coach of all time, just his ability to switch things up for a quarterback and make you see two different things."

"There's some good familiarity with the players and the matchups and things like that, but you know, schemes change. Each game is its own game. Particularly against a team like this, that couldn't be more true."

On the Patriots defense...

"They do so many great things, especially on the defensive side of the ball. Being able to switch coverages, being able to play man coverages out of zone looks and zone coverages out of man looks. They've just got a lot of smart, savvy veteran players over there that play to their strengths and they're extremely well-coached. And when you have that type of defense, they're relying on the offense to make mistakes and expecting the offense to make mistakes because they're so sound fundamentally."

"Coach Belichick is an exceptional football coach and defensive mind. The one thing you can expect is the unexpected. So, for us it'll be understanding that they're going to make adjustments (from the last meeting) and game time adjustments as well. For us, it's just understanding our rules. So, it'll be a great battle. For us, it'll just be matching the intensity and playing the best we can as a unit."