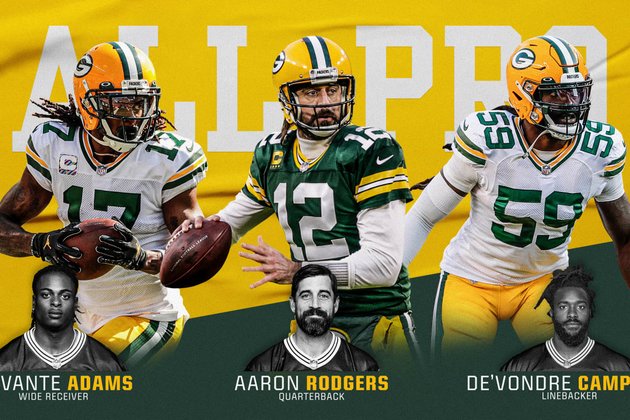 GREEN BAY - Packers quarterback Aaron Rodgers, receiver Davante Adams and linebacker De'Vondre Campbell have all been voted first-team All-Pro, as determined by a vote of 50 media members of the Associated Press.

This marks Rodgers' fifth All-Pro selection. He has been named NFL MVP during each of his previous three first-team All-Pro campaigns (2011, '14 and '20). He was named to the second team in 2012.

Rodgers' four first-team All-Pro selections are the most for a QB in team history. Pro Football Hall of Famer Brett Favre had three (1995-97).

Adams, who was one of five unanimous first-team All-Pro selections, is the first Green Bay receiver to make it back-to-back since Sterling Sharpe in 1992-93. This is Campbell's first All-Pro recognition.

Campbell's selection is historic for the Packers. He's the first Green Bay inside linebacker to make AP first-team All-Pro since Pro Football Hall of Famer Ray Nitschke in 1966.

Campbell, who signed with the Packers on June 9, started all 16 games he appeared for Green Bay and led the defense with a career-high 145 tackles (101 solo), including six for a loss.

The sixth-year veteran had two interceptions, two sacks, five passes defensed, two forced fumbles and recovery. He ranked seventh in the NFL among all defenders in tackles. Campbell was one of only three players (Derwin James, LAC; Antoine Winfield Jr., TB) with multiple INTs, sacks and forced fumbles.

According to Pro Football Focus' Mike Renner, Campbell missed just four tackles this season. Every other linebacker with at least 80 solo tackles had double-digit missed tackles.

"I think he is absolutely worthy of that honor but sometimes it takes a year to really get your name out there for everybody to recognize it," said Head Coach Matt LaFleur on Dec. 23, one day after Campbell wasn't named to the Pro Bowl.

"But I think everybody on this football team, in this building and around the league that really knows what's going on knows that he's been a tremendous player this season for us and he's a big reason why we've been able to have so much success not only on the defensive side of the ball but as a football team."

Rodgers led the league in INT percentage (0.75) for an NFL-record sixth time and for the fourth straight season (no other QB has done it in three straight years). He was voted to his 10th Pro Bowl last month, along with being honored as the NFL's Offensive Player of the Month in December.

Adams and Los Angeles Rams receiver Cooper Kupp were both unanimous first-team selections, earning all 50 votes. Adams came one vote shy of achieving that feat last year. The eight-year receiver established new single-season franchise records in receptions (123) and receiving yards (1,553) in 2021. He finished second in the NFL in receptions and third in receiving yards, while also leading the Packers with 11 touchdown receptions.

Furthermore, Adams became just the sixth player in NFL history with 120-plus receptions, 1,500-plus receiving yards and 11-plus receiving TDs in a season. He was named to his fifth straight Pro Bowl in 2021, one behind Hall of Famer James Lofton's franchise record for receivers of six (1980-85).