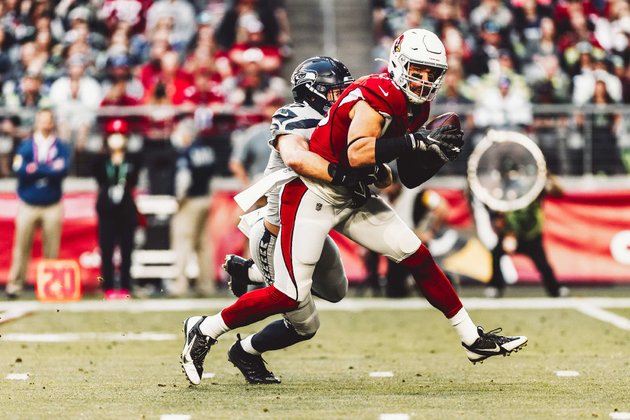 When Cardinals GM Steve Keim traded for Zach Ertz before Week 6, the tight end landed in Arizona focused on learning the playbook.

Understanding a new offensive scheme requires time to grasp for any player arriving with a new franchise. In Ertz's case, it included the challenge of picking up coach Kliff Kingsbury's offense on the fly.

"It was a lot different from anything I've seen before," Ertz said. "But once you get the basics and start understanding the fundamentals of the offense, it makes a lot of sense, and you're able to play extremely fast."

His comfort level with the playbook has translated to the field. Ertz has 56 receptions for 574 yards and three touchdowns on 81 targets in 11 games since the trade.

His reception total tied Hall of Famer Jackie Smith for the franchise single-season record for catches by a tight end, which Smith set in 1967. And his receiving yards as a Cardinal are the most from a franchise tight end since Doug Marsh had 608 yards in 1984.

The Cardinals have relied more on Ertz since Pro Bowl wideout DeAndre Hopkins suffered a knee injury in Week 14 against the Rams. In the four games since, Ertz has 253 yards on 28 catches and 43 targets, which leads the Cardinals' pass-catchers.

"He's always where he should be at the right time," Kingsbury said. "He's got a great feel for route running and creating separation. It's impressive to see the trust he and (quarterback) Kyler (Murray) have developed in such a short amount of time. And it's impressive how he's picked up the system and is operating like he's played in it for ten years."

Ertz called Murray the most talented player he's been around and praised the quarterback's accuracy and decision-making. They constantly talk about routes, including where Murray wants Ertz against certain coverages. Their relationship off the field made it easier to develop chemistry on the field.

"He's always open," Murray said with a smile. "I don't know how, I don't know why. Nine times out of 10, he wins his route. He's a savvy guy who knows who to get open. He knows every defensive coverage known to man. He's a great teammate."

Baker finished this season with 98 tackles, two sacks, and one forced fumble. He said he received the news Friday morning from some peers.

"Me being the type of person I am, I rather like first-team," Baker said with a chuckle. "But it's a blessing that these guys feel that type of way about me. But at the end of the day, those things kind of come and go. It's a matter of what we're living in right now."

J.J. Watt was limited for the second consecutive day at practice, but the defensive coordinator expressed optimism regarding his status for Monday.

"We'll see what happens Monday, but don't be shocked if he's ready to go," Joseph said.

Linebacker Isaiah Simmons did not practice, but Joseph said it was due to a family matter and he would be back Saturday.