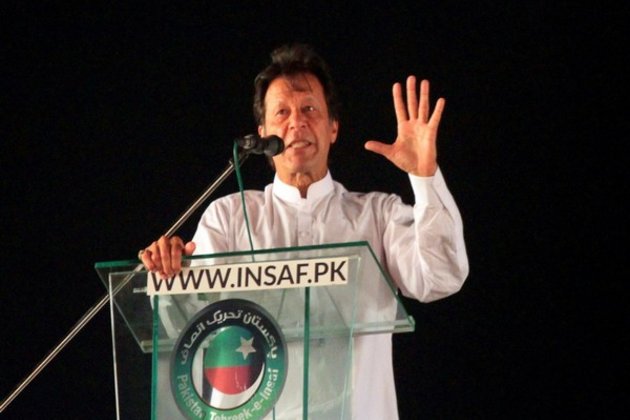 Islamabad [Pakistan], June 23 (ANI): Hitting out at the government, Former Pakistani Prime Minister Imran Khan on Wednesday said that the then opposition coalition was "afraid" that he would appoint former ISI chief Lieutenant General Faiz Hameed as the next chief of the army staff, local media reported.

"They were afraid that I wanted to appoint Lieutenant General Faiz Hameed. They feared that if that would have happened then it would shatter their future," the Pakistan Tehreek-e-Insaf (PTI) chairman said. Clarifying his stance, Imran Khan said, "I never thought of appointing someone as army chief. I have never taken a decision that is not based on merit."He made these remarks during a seminar on "Regime Change Conspiracy and Pakistan's Destabilization".

Furthermore speaking on the alleged corruption by the incumbent government, the ousted prime minister Imran Khan said that the government is "afraid of the army and the Inter-Services Intelligence" as they know that their "corruption" will be caught at some point, reported Geo News.

Earlier, Faiz Hameed was removed as the Director-General of the Inter-Services Intelligence (ISI) and appointed as the Peshawar Corps Commander. Hameed is said to have been handling military and diplomatic roles and also fighting Imran Khan's political opponents, particularly the family of exiled three-time prime minister, Nawaz Sharif.

Imran Khan chided the incumbent rulers for allegedly "murdering the institutions" and appointing "their people" to every institution.

Former finance minister Shaukat Tarin, while talking to the participants of the seminar, said that the government was formed not for providing relief to the people, but to get the rulers "freedom from NAB (National Accountability Bureau)."In another scathing attack on the Shehbaz Sharif-led government, Tarin said that the government is so "incompetent" that later this month, a mini-budget is expected -- after it reaches an agreement with the International Monetary Fund, as per the media portal.

Notably, on Tuesday night, Pakistan and the International Monetary Fund (IMF) evolved a broader agreement on the budget 2022-23 to revise upward the Federal Board of Revenue (FBR) target and slash down the expenditures to achieve a revenue surplus in the next fiscal year. They are expected to reach an agreement soon.

Finance Minister Miftah Ismail while speaking with a group of journalists said, "We have locked the budget for fiscal year 2022-23 in consultation with the IMF and now the Fund will consult with the State Bank of Pakistan on monetary targets." The minister spoke after having a final round of talks with the IMF Mission Chief Nathan Porter, reported The Express Tribune. (ANI)