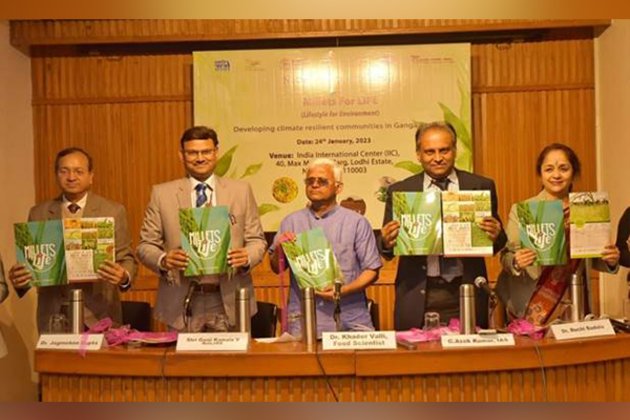 The seminar featured experts involved with several aspects of millet cultivation and marketing promotion, including policymakers, academicians and practitioners.

Extensive deliberations were conducted on various strategies to promote natural farming and sustainable development in the Ganga Basin.

While the United Nations General Assembly (UNGA) has declared 2023 as the International Year of Millets (IYM), Prime Minister Narendra Modi has called for a mass movement in the country to promote millets.

It also gave an understanding of instilling skills for millet-based alternative livelihoods to enhance local incomes.

G. Asok Kumar, DG, NMCG, expressed gratitude towards Ganga Praharis for their support to the rejuvenation of the Ganges. Referring to the UN recognition of the Centre's flagship 'Namami Gange' initiative as one of the 'Top 10 World Restoration Flagships to Revive the Natural World', he credited the Ganga Praharis for the achievement and called them the 'Brand Ambassadors' of the 'Namami Gange' programme.

Kumar emphasised the importance of millet, which forms an integral part of the core diet of people residing in villages and is part of the Indian culinary tradition.

"We have forgotten the traditional wisdom of our own country because of the tendency of some among us to emulate the west blindly. It is time to go back to our roots," he added, invoking the Prime Minister's Independence Day speech in which he laid the 'Panch Pran' (five commitments) for citizens in the 'Amrit Kaal'.

PM Modi said the goal of a developed India is to remove any trace of the colonial mindset, and take pride in the country's roots, and unity. He also sought to instil a sense of duty among citizens.

"We have to address the challenge of monetising millet cultivation so that more and more farmers make the shift. We have to make the 'Millet Campaign' profitable for farmers," Kumar said, adding, "We will try to make the Ganga Basin a Millet Basin in the coming few years."He also mentioned the 'Sahi Fasal' campaign, launched in 2019 by the National Water Mission to nudge the farmers to grow less water-intensive, economically remunerative and environmentally friendly crops.

CEO of the Food SafetyStandards Authority of India (FSSAI), Ganji Kamala Vardhana Rao, emphasised the changing consumption patterns of people and stressed the need for taking up eating habits based on the nutritious value of the food we eat. "We have to change our perspective and shift to a sustainable living rooted in the traditional wisdom of our own country," he added.

Food Scientist Dr. Khader Valli termed millet a superfood that is available in 2,800 varieties on the planet. He said millet is important for sustainable development as it immensely improves our immunity due to its rich fibre content.

"Millets is our traditional food which used to be the source of essential nutrients. The other grains prevalent in India are imposed in one way or the other," he said, adding, "Millets are also important from the point of view of water conservation as they consume very less water as compared to other crops."He said India must focus on producing millet on a large scale and that people should go back to traditional eating habits to remain healthy. (ANI)